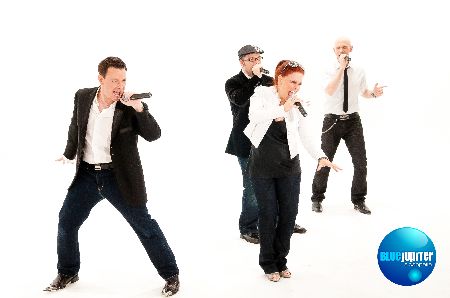 Blue Jupiter redefines popular music in the studio and on stage……and they do it all A Capella!  Blue Jupiter is an edgy pop-funk band that has everything to offer, but instruments. Blue Jupiter can be heard on the radio nationwide performing their funky-pop version of the classic Oreo Jingle. Blue Jupiter rocked audiences recently headlining at VH1's Save The Music Event in Oswego, NY, Braking the Cycle (annual AIDS fundraiser), and an international tour to Hong Kong. 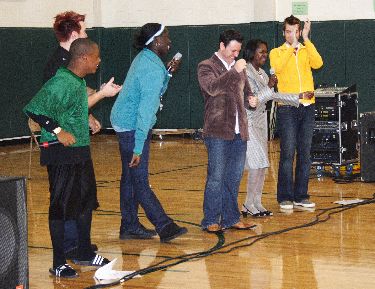 Blue Jupiter will demonstrate a cappella in a variety of styles as they cover the past in their Funk Bus(chant/barbershop, doo-wop styles), present the use of vocal percussion past and future of the art form. This is an interactive educational assembly where the students get a chance to sing, try vocal percussion, direct questions to the band, and answer a few questions at the end of the assembly about what they just learned. Length: 45 Minutes

Blue Jupiter presents “Scattered Flurries,” a holiday-themed performance that combines their unmatched a cappella arts-in-education programming with contemporary, all-vocal arrangements of Christmas carols and Chanukah songs. Blue Jupiter is a must-see-to-believe romp of vocal acrobatics and instrument imitation. Audiences will learn about a cappella music past, present and future. Students, teachers and parents alike with learn how to make drum sounds with their mouths, and everyone can sing and clap along to their favorite songs of the season. Start thinking of your favorite holiday songs now because Blue Jupiter has added a special treat for the holidays: an interactive all-request portion to their show. Presented as a lightning-round of “Name That Tune”, the audience will request several holiday songs and Blue Jupiter will arrange and perform them on the spot. The ultra-high energy of Scattered Flurries and the constant audience participation make this Blue Jupiter performance the perfect holiday treat for audiences of all ages. Length-45 Minutes

Invite the entire community to attend an evening presentation of Blue Jupiter!!! This performance will feature different songs from the daytime program and includes a post-show meet and greet with Blue Jupiter. Length 60 Minutes Call for evening pricing.

Call the office for pricing and details 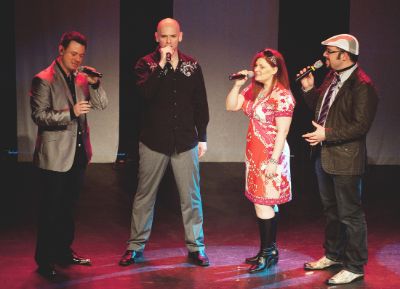 Blue Jupiter is an edgy pop-funk band that has everything to offer, but instruments. The recent winners of Oreo’s “Milk’s Favorite Jingle Contest” hosted by American Idol’s Randy Jackson, can be heard on the radio nationwide performing their funky-pop version of the classic Oreo Jingle. Blue Jupiter rocked audiences recently headlining at VH1’s Save The Music Event in Oswego, NY, Braking the Cycle (annual AIDS fundraiser), and an international tour to Hong Kong. Blue Jupiter was a featured act at the Harmony Sweepstakes, both in Washington DC and New York City, winning Audience Favorite and Best Arrangement two years in a row. Blue Jupiter’s debut album “Ear Candy” was nominated for best contemporary album of the year by the Contemporary A Cappella Society and they have since produced two more albums – “Scattered Flurries”, and “Live in NYC” with a fourth on the way. Blue Jupiter redefines popular music in the studio and on stage… …and they do it all with only their voices.

February 2008, Touring in China: Including Shanghai American School – a private K-12 English speaking school performing and conducting workshops and assemblies for all the students!

From New Canaan Country School: “Today we experienced Blue Jupiter, the a cappella group from New York and they were wonderful! Marty’s multitasking bass and beat boxing rhythm section was amazing. Chris’s solo on “Life is a Highway” was incredible and Diane’s McDonald’s impression was hilarious. Artie did a really good job in “Let it Snow” and they were all extremely good. I recommend seeing them . Blue Jupiter is the best a cappella group I’ve ever heard!” Kate Connors, Grade Five “I thought that the performance was really cool. My favorite person was Marty. I thought that the drum was very cool. They were good performers. They were really funny. I never knew that they do the song in the Oreo commercials. They were all very talented and I’m not surprised that Randy Jackson picked their group out of 12,000 other groups. It was really cool that they didn’t use any instruments. It was hard to tell that there were no instruments.”

Kyle Salvatore, Grade Five: “I enjoyed the Blue Jupiter Forum. It was so cool. I would give them 5 stars. They were funny, entertaining and awesome. They were terrific. Like a magician, they were magical. I hope I can see them perform again. I will probably buy a CD. I was inspired by them. They were cool.” Alyssa Thomas, Grade Five. Comments from a Teacher at Hamden Hall: I am a Spanish teacher at Hamden Hall where you sang today. I have to tell you that I was blown away. Having sung in acapella groups from high school to The Salt & Pepper Gospel Singers for the last ten years, music has always been a huge part of my life. I like to think that I know good music when I hear it and today I heard the best music our theater has ever hosted. Thank you so much! Keep up the great work. I’ll be keeping track of you and hoping for good things to come your way. — Henry C. Mixsell (Hank)

What the staff at CT Children’s Medical Center said about Blue Jupiter’s visit to the Center: The members of Blue Jupiter did such a fantastic job yesterday at CT Children’s Medical Center. The musicians sang to every child there and saw hope in all of their eyes. This day not only touched the children, but deeply affected the vocalists of Blue Jupiter as well. In fact, after spending a few hours there Blue Jupiter donated CD’s to the children to play in their CD’s players in each of their rooms! One staff member stated, “I just wanted to thank you again for coming in to perform for the kids. One young girl was blown away by Blue Jupiter. She fell asleep with the picture of Blue Jupiter in her hands. It meant a lot to her. It’s not every day that people get to have a talented group of musicians perform right in front of them-up close!”