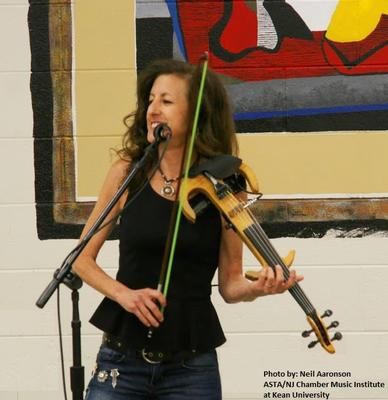 Caryn Lin is a classically trained violinist who became an electric violinist, composer, educator, and music innovator. Years of concentrated experimentation with sound results in a live show that is the musical equivalent of light traveling through a prism – it is spectacular! Caryn plays electric violins, using looping techniques to create on-the-spot recordings of her instruments, voice, percussion, and other sounds. Traditional sound is transformed by modern technology.

THE SCIENCE OF SOUND

In the amazing multi-media presentation The Science of Sound, Caryn Lin literally transforms sound through the use of her five-string electric violin and a myriad of modern technology! The program takes students on a journey from the classical days of Bach to today’s techno-wonders. By using modern techniques, including looping and other effects to produce unique and dynamic soundscapes, audiences are introduced to the many scientific concepts involved in the creation of live music. Through the use of technology, three dimensional sound waves become visible, bringing music to life before the audience’s very eyes!

Caryn also offers post performance workshops called Electric Sound. She works with smaller groups of students (about 20 per workshop) to demonstrate looping, sound effects and other techniques she shares throughout her performance to give students a more in-depth, hands-on experience in the workshopElectric Sound. 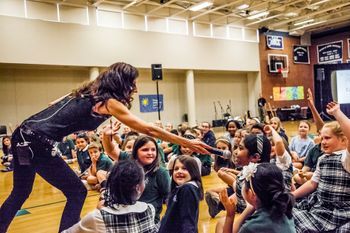 Caryn began violin lessons at age 9, and studied under Philadelphia Orchestra’s Larry Grika until college, where she earned a violin performance degree from Northwestern University. Upon graduation she moved to Germany to study with world renown violinist Suzanne Lautenbacher. Caryn has performed everywhere from The Kimmel Center and Lincoln Center to the Crayola Crayon Factory and a Carthusian Monastery in the French Alps!

Her music has been featured on MTV’s The Real World, & on over150 radio stations, in the US, UK, Spain, & Venezuela, and on Satellite radio. She and her music appeared in the movie, “Philadelphia.” Her 5th studio album, “The Call” was released in 2006. A 6th CD is currently in the works! Since 2001 Caryn has worked with half a million kids in over 3500 schools and community venues.