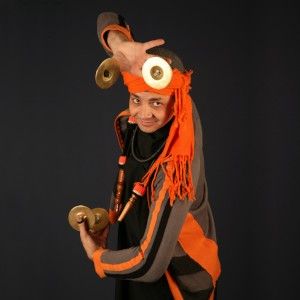 Karim illustrates what it means to be bi-cultural in the US.  Music, Dance, Arabic Language are featured as Karim plays Arabic, Turkish and Andalusian hand percussion, including the Egyptian Tabla (goblet drum), Riqq (tambourine), Duff (frame drum), and Segat (brass castanets). Students will have their first-lesson in the Arabic language. Learn a three sound clapping system which allows anyone in the crowd to perform the Arabic rhythms without an instrument and a brief demonstration of Dabka Line Dancing. 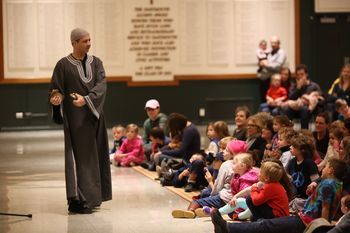 Karim defines the term Arab and Arab-American by equating it to African-Americans, Latino-Americans, etc. Karim illustrates what it means to be bi-cultural. Karim then gives a dynamic and entertaining demonstration of the various instruments including an array of drums and the Buzuq (longneck lute). He elicits audience participation throughout by having them pronounce the instrument names, a deliberate first-lesson in the Arabic language. Next he teaches a three sound clapping system which allows anyone in the crowd to perform the Arabic rhythms without an instrument. Karim concludes with a brief demonstration of Dabka Line Dancing and, when feasible, invites participants to learn as the rest of the audience provides rhythmic accompaniment via their newly learned clapping method. The presentation is animated, humorous and participatory. It is very effective with Elementary and Middle School groups. Karim also has a version for High School and Adult general audiences. 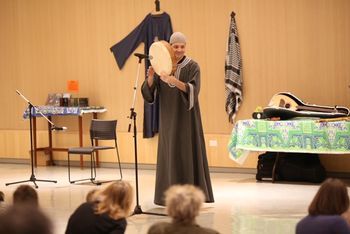 “When my son (who is in 2nd grade) got into the car after school, he immediately said, “Mom, we had the most amazing assembly today that we ever had! You should have seen this guy who was from Egypt and played instruments!” He went on and on.  It was very exciting for me (as a mom) to be able to talk with my son about my favorite parts of the assembly and compare notes.  Thank you for bringing Mr. Nagi to Brunswick.  I particularly enjoyed how he encouraged the boys to make a choice and stay with their decision…to trust themselves.”