Billy B uses songs, dances, theatrical backdrops and improv comedy to reach and teach his audiences about the wonderful workings of our beautiful planet. Billy B is also featured on the artist rosters at Young Audiences of MA, and Young Audiences of NJ. 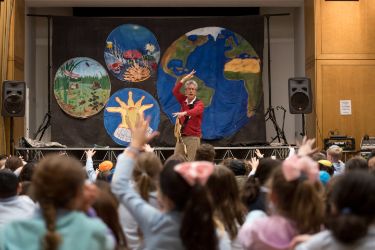 Billy B. uses science, humor, music, dance, and audience participation to introduce the wonder of our earth’s biodiversity, why it is declining, and how we can help to protect it. Billy B. hopes to educate people of all ages about biodiversity by introducing issues such as pollution, deforestation, and overfishing and how other human behaviors affect the biodiversity of our earth. This show was commissioned by the World Wildlife Fund as a complement to the traveling exhibit entitled Biodiversity 911. 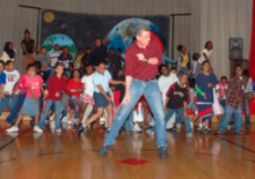 Nature in the City (Grades K-8)

Billy B. examines “urban ecology” in this funny musical introduction to the interaction of plants, animals, humans, and the environment in metropolitan areas. Nature in the City examines the neighborhood ecosystem through song and dance as Billy encourages his audiences to become stewards of the planet. 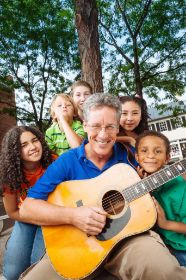 In Ways of the Bay, Billy B.’s introductory song illustrates how water running off a roof into a drain spout will eventually end up in the local watershed. All of the water from the streets that flows into storm drains or ditches also eventually flows into the closest creek or river. Through song, Billy B. emphasizes that there can be millions of people living within the watershed of a typical bay. Billy also introduces the concepts of excess algae, runoff, oxygen loss in the water, estuary, brackish water, nutrients, decomposers, and plankton. Billy ends his program by talking about a bay’s airshed, energy conservation, and how we can all help to keep the bay healthy by saving energy and planting trees. 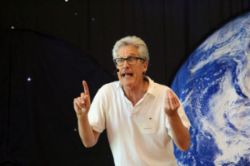 Billy B leads his audience through a song and dance exploration of the differences between weather and climate, the structure and benefits of the atmosphere, and how it all supports the amazing diversity of plant and animal life on our beautiful planet. For older students, Billy introduces the concepts, and science of, the human impact on the atmosphere/climate.

Kids have taught Billy they want to do two things; move and make noise. So Billy’s live shows and his recorded music all encourage audience participation.The musical styles he employs in his original songs range across the sounds of funk, reggae, salsa, rockabilly, hip hop, folk rock and hard rock. Sometimes the subject determines the style; tectonic plates = hard rock, but ultimately it’s whatever style will move his audience. His audience participatory dances are derived from a mix of street/fad styles and Billy’s background in ballet. For Billy it all started at university in a class called “ Dance in Childhood Education”. Thirteen original live shows (five commissioned) and nine recordings (five commissioned) later, Billy still practices kinetic learning, interacting constantly with his audience.