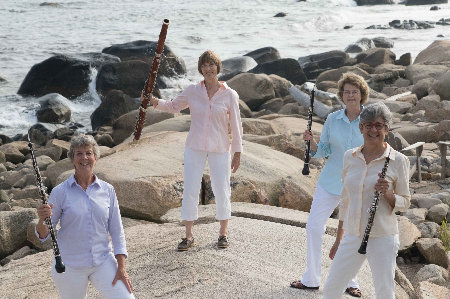 Take a journey through the history of double reeds, experiencing music from the Renaissance to the present. Learn how the double reed works, the interesting sound of the instruments, and what makes the double reeds unique and fun to play.

Take a journey through the history of double reeds, experiencing music from the Renaissance to the present.  Learn how the double reed works, the interesting sound of the instruments, and what makes the double reeds unique and fun to play.

Goals of the Program:

“The Costal Reeds performed a concert for the Community Music School in Centerbrook, CT this past year. It was an exciting, well received event! Each member of this unique ensemble is a highly accomplished instrumentalist with great fluidity and skill, so it was a joy to hear the double reed instruments played at such a high level. Their program was smartly crafted mixing musical styles and examples from the past though the present and also traced the evolution of the double reeds throughout music history. The educational part of their program featured many captivating visual components and was fun, interactive, and upbeat and related well to our student audience. I highly recommend this talented, versatile ensemble for all school programs and concerts!”
Thomas Briggs, Music Director, Community Music School

“This program is fun and engaging for students of all ages! Not only do they teach you about the instruments in the double reed family, the Coastal Reeds  also engages students through music they can connect to. The Coastal Reeds take you on a trip through history with their program, starting from the Renaissance era to present, popular music. My students were so impressed by their playing and the music, many wanted to switch to a double reed instrument!”
Charlotte D’Aleo, Band Teacher-Henry James Memorial School 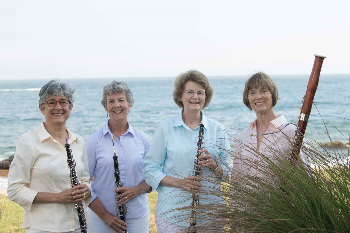 MARILYN KRENTZMAN is a former public school teacher and a veteran conductor of many school performing groups. Ms. Krentzman has been a member of the Hartford Symphony for 30 years and has been a soloist with the New Britain Symphony and Chamber Orchestra New England. She is a graduate of the Hartt School, University of Hartford and holds a Master’s Degree in Music Education from Western Connecticut State University.

TAMAR BEACH WELLS, a frequent soloist at the Burlington Congregational Church, is a founding member of the Grammy nominated Borealis Wind Quintet. She is the principal oboist with the Greater Bridgeport Symphony. In addition to the oboe, she plays the English horn, oboe d’amore and bass oboe and frequently collaborates with vocalists, choruses and other artists in diverse settings ranging from traditional solo performances to recording sessions from pop to opera. She has also given hundreds of children’s concerts with the Hartford Symphony’s inner city outreach program. Ms. Wells holds Bachelor’s degrees in performance and education from the Hartt School and a Master’s degree from the Juilliard School.

REBECCA NOREEN, bassoonist, was a winner of the Artist International Competition in New York City with the Kammer Quintet. She graduated with a M.M. from Manhattan School of Music and from Western Washington University where she obtained a B.A. and B.E. Ms. Noreen performs with the Hartford Symphony Orchestra, the Eastern Connecticut Symphony, Waterbury Symphony and the Rhode Island Philharmonic.

ANNE MEGAN was the principal oboist of the US Coast Guard Band for twenty years and the Eastern Connecticut Symphony for 37 years. Anne attended the Eastman School of Music where she studied with Robert Sprenkle, and received her BM in Music Education from Boston University. Anne teaches privately from her home.

The Coastal Reeds have been performing together for over 10 years, playing in libraries, concert halls, schools and churches.