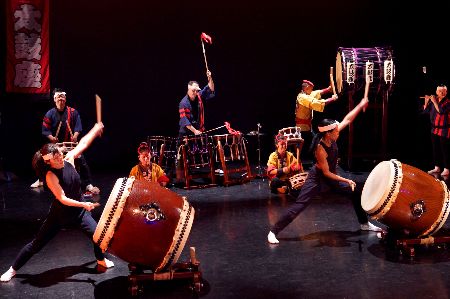 Taikoza brings music and dance inspired by traditional festivals throughout Japan. This program includes exquisite and colorful dances in full costume, the enchanting sounds of bamboo flutes, the koto and the thunderous sounds of the large, barrel-like taiko drums. Taikoza brings fun audience participation and the powerful, yet graceful synthesis of sound and motion to audiences all over the world. 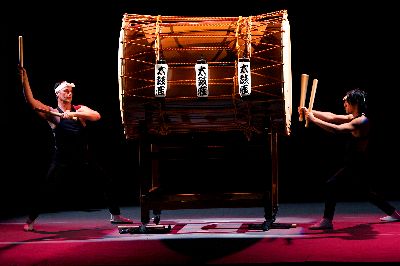 Taikoza will bring your students on a  journey through Japan through the seasons and the different geographical areas.  A fun and entertaining way to learn about Japanese music and culture!

The program consists of songs played on 150lb drums and bamboo flutes. The program includes  student participation elements. The taiko drums and flutes are a central part of the Japanese festivals throughout the year.

The first song is a summer festival played on the 2-ft drum called Hachijo- It will feature the Taiko drums and give a sense of the energy and power that Taiko drumming can bring. The next song is played on a Bamboo flute called the Shakuhachi and students will learn about the different bamboo flutes used in Japan. The next song is a fun summer song from Okinawa that will include some student participation.

Taikoza Rhythms & Dance (Grades 3-12; younger students may be included with a mixed-age audience)

One drummer and musicians present music and dance inspired by traditional festivals throughout Japan. This program includes exquisite and colorful dances in full costume, the enchanting sounds of bamboo flutes, the koto and the thunderous sounds of the large, barrel-like taiko drums. Fun audience participation and the powerful, yet graceful synthesis of sound and motion that is Taiko will make this program a memorable experience for your students.

East Winds Ensemble presents a program of Japanese music  played on the 13-string koto and the  different bamboo flutes: the five holed shakuhachi, the  Shinobue and Noh theater flute. The programs consist of duets and solos  played on the different instruments. The members will demonstrate the instruments and have some of the students try out the instruments – the group will bring some  flutes so that some of the students can try it out. The Music varies from folk songs to more classical traditional pieces. 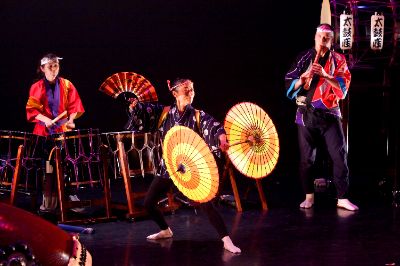 What Schools are Saying:

"Our third grade studies Japan and its culture so the tie-in with our curriculum provided our students with an opportunity to hear and see some of the traditions about which they had only read. The performers held the audiences attention with the sounds of the drums, but when they invited students to join them, it became a truly personal event, which they will not forget. Thanks to Arts for Learning Connecticut for providing these opportunities."
-Alison Cochrane, Vice President of Salem School PTO

“An amazing Shakuhachi player Marco Lienhard has come out with a new CD, truly a very gifted and wonderful sense of musicality. Not since “ National Treasure” Yamaguchi Goro’s rendition of Kinko Honkyoku music have I felt the need to listen to more of his music. His rendition of Honkyoku form the Watazumi style is incredible and everyone studying the style should listen to it. His powerful and heartfelt rendition of Amazing grace reminded me of such gospel singers as Mahalia Jackson.”
-From Hogaku Journal, Tokyo 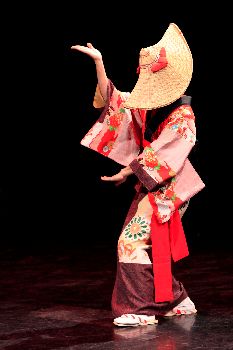 Taikoza is a New York-based Japanese Taiko drum and dance ensemble that uses the deep and powerful rhythms of the Taiko drums, stringed instruments, metal percussion and bamboo flutes to create electrifying energy and a highly visual musical art form. Drawing from Japan’s rich tradition of music and performance, Taikoza has created an original and high-energy sound that transcends national boundaries. Taikoza has thrilled audiences all over the world with its highly educational and artistic programs.